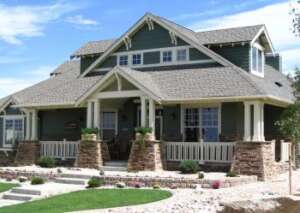 Bungalow house plans were first developed in India and the term was later used to describe the elegant homes in which British officials lived while working for the East India Company. Bungalow house plans made their American debut in the late 19th century and have been popular with families who want efficient spaces, unique style and outdoor living areas ever since.

Bungalow house plans commonly have open floor plans that make them feel large and spacious. These flowing floor plans are ideal for families who want to entertain or simply enjoy the convenience of free-flowing living.

Large front porches flanked by grand columns are another defining feature of bungalow house plans. The front porches are the perfect place to enjoy the outdoors, dine and gather with friends or family, and they effortlessly connect the indoors and outdoors.