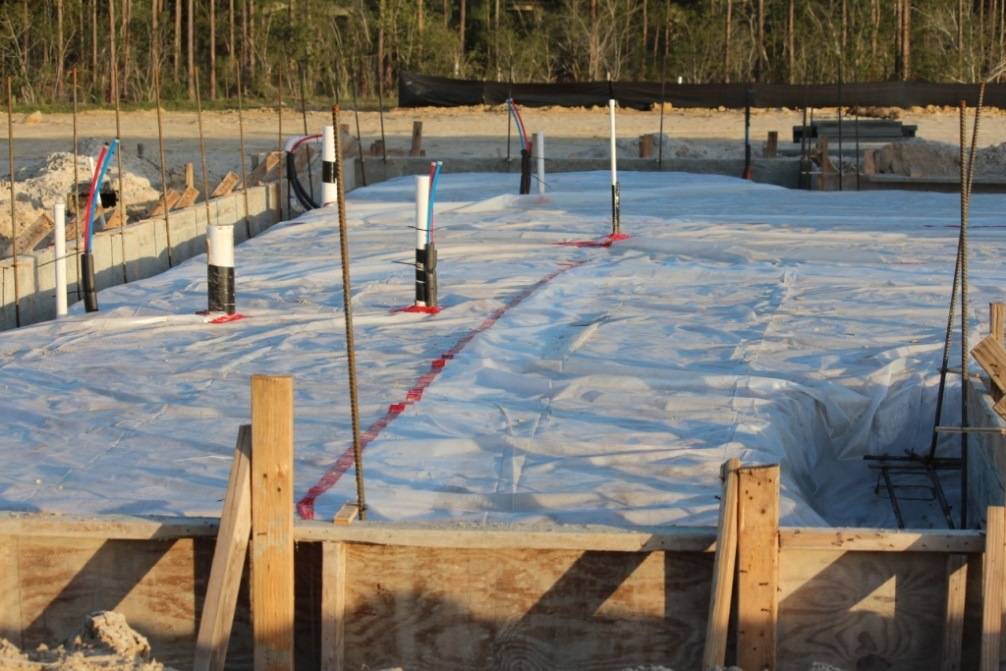 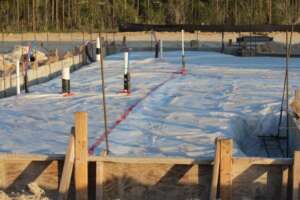 Radon gas is known to be the second leading cause of lung cancer in the United States.  You can’t smell it, and because it’s a gas, you obviously can’t see it.  It comes from the ground, so any home that is built on or in the ground has the potential to be exposed to radon.  Over 8 million homes in the U.S. have dangerous levels of radon, according to the U.S. EPA.  So here are some very inexpensive ways to include radon mitigation into your new home build.

If your home is built with a basement, slab, or crawl space foundation, you will want to seal up the concrete slab to prevent the migration of radon gas from the ground up into the home.  In the photo above, you see a plastic (6 mil polyethylene) placed just before the concrete slab is poured for a new home.  All of the seams in the plastic have been sealed with red tape.  The plastic is also carefully sealed to the plumbing risers that will come up through the floor.  Underneath this plastic is a minimum of four inches of stone that will allow the radon gas to migrate freely (we’ll talk about why we want this in a minute).  Once the concrete has been poured, all cracks and gaps in the floor will need to be filled with a polyurethane caulk.  This would include all control joints, the perimeter at the foundation wall, plumbing pipes…etc.

If your new home has a sump crock, it will need to be a sealed unit.  Meaning, the lid need to have an air tight seal to prevent any gas that migrates from under the slab into the crock from escaping up into the home.

Sealing up the concrete slab contains the gas below the home, but it’s also important to give it an opportunity to escape to the outside.  The least expensive way to do this is with a passive vent.  This vent involves installing a three inch PVC pipe that starts with a “T” fitting embedded in the stone below the slab.  The stone below the slab allows the radon to migrate underneath the slab to the vent as opposed to a densely packed dirt or clay.  Then the sealed pipe runs vertically up through the house and terminates a minimum of twelve inches above the roof.  If possible, this pipe should be centrally located in your new home.  This system will cost you $300 or so on a new home build.

If you test your home for radon after moving in and still have elevated levels of the gas, you will want to install a fan on the vent to help suck the radon from under the slab.

What if your new home has a basement with a crawl space?  Because there are two separate levels, you will need two passive radon vents…one for the crawl and one for the basement.  And be sure to have the crawl slab sealed in the same way as the basement floor.

For more information about radon including maps showing where radon is found most readily, check out this resource from the U.S. EPA.